I aim to share feedback on many topics, including life in France, and technology experiments. Will try to make it interesting and fun.

We all face moments where we feel as not being as smart as expected. You know, those times where we lack of spirit presence, and of connection with the real world. It sometimes happen with R too, and that’s the subject of today’s post. Let’s focus on some reccuring needs, and how to address them gracefully in a very concise and convenient way.

END_OF_DOCUMENT_TOKEN_TO_BE_REPLACED

Being newbie or experienced on R, we all face many recurring issues with R syntax, R interpreter and R pitfalls. Patrick BURNS book is worth reading and allows to become really aware of many commons pitfalls. Nevertheless, I really believe that this ends up to be necessary but still insufficient. That’s why, I would like to share my way through R hell and describe here most important practices I stick to, and the reasons to do so.

END_OF_DOCUMENT_TOKEN_TO_BE_REPLACED

All the terms are given and to be understood in the scope of AI. Many of them, have several meanings. Do not get trapped by the meaning. Know what you aim to.

END_OF_DOCUMENT_TOKEN_TO_BE_REPLACED

This is the last post of a 4 posts serie, dedicated to chessplay and more specifically to the battle of influence on the chessboard.
We are now trying to create a methodical appraoch to improve our chess play.

END_OF_DOCUMENT_TOKEN_TO_BE_REPLACED

This is the third post of a serie, dedicated to chessplay and more specifically to the battle of influence on the chessboard.
We are now trying to compute influence zone over the chessboard.

END_OF_DOCUMENT_TOKEN_TO_BE_REPLACED

This is the second post of a serie, dedicated to rchess R package.
This week we aim to produce chess game half-move images and to proceed to a movie montage in order to get a video representative of the full chess game. In cas you missed first part, you may read part 1 here

From a pgn chess file, using rchess, we should be able to load the game, get the FEN string for each of its positions and to produce a ggplot to be saved under png image format. Pay attention to not confuse pgn and png. To do so, I’ll use following R code, and use a short file I played with black side on lichess.org ```R fn <- file.path(“~/pgn”, ‘20180410_Chessmonkey1_vs_neonira.P4oDzgTw.pgn’) pgn <- readLines(fn, warn = FALSE) pgn <- paste(pgn, collapse = “\n”) chsspgn <- Chess$new() if (!chsspgn$load_pgn(pgn)) stop(paste(‘unable to load pgn file’, fn))

END_OF_DOCUMENT_TOKEN_TO_BE_REPLACED

I am fan of chess. As a player, I face some real issues with my play and wish to know if rchess could help improve your/my chess play.

I have at least 2 ideas to test with rchess. First one, is assessing easyness of chess diagrams and chess movies production. The second one, is about creating new analysis diagrams based on chessboard influence.

Let’s keep it simple. You should browse http://jkunst.com/rchess/ to get some knowledge about how to use rchess. This site is simply good and reliable source of information about rchess.

END_OF_DOCUMENT_TOKEN_TO_BE_REPLACED

Chess engine championship TCEC season 9, stage 3 terminated on first week of September 2016, and we can not argue without surprise. Stockfish had a powerfull lead, and Houdini, already 3 times winner of this championship, succeeded in qualifying for the final. One looser, Komodo, current champion, faced strong opposition, apparently stronger thant supposed to be qualified.

END_OF_DOCUMENT_TOKEN_TO_BE_REPLACED
As stated in previous article about sudokus sudoku solver, I experimented my solver on really hard to solve sudokus. Consider the following, taken from The Weekly Extreme 'Unsolveable' Sudoku Puzzle #154 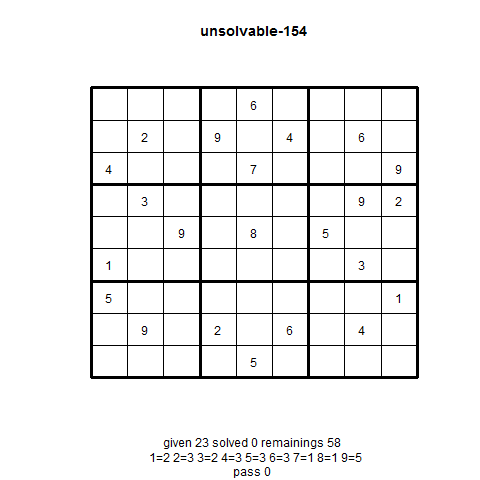 Before I enter into analysis, you should try to solve it by hand. Get ready to face some trouble.
Sincerely, I believe I would have give up before finding final solution, if I had to do so.