One good friend of mine, fond of Sudoku, was arguing that sometimes you need to infer several times to achieve solving. His assertion makes me feel unsure.

On one hand, I remembered solving really tough sudokus by hand and I had to guess several times before finally succeeding in resolution. On the other end, I am wondering if we infer because we do miss some logical deduction(s) in a prior step of resolution.

As I do not like being in doubt, and eager to get an answer, I asked him for some samples of sudokus where he had to infer several times on each. He provided me two of them. He told me the first one was taken from a French newspaper, and the second from the on-line site websudoku, section 'evil'.

Here are the starting grids for each of them. 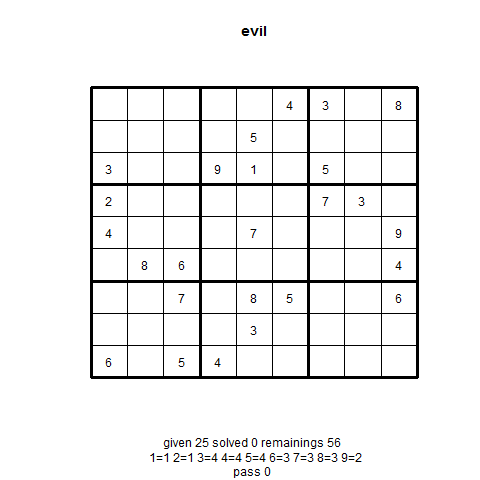 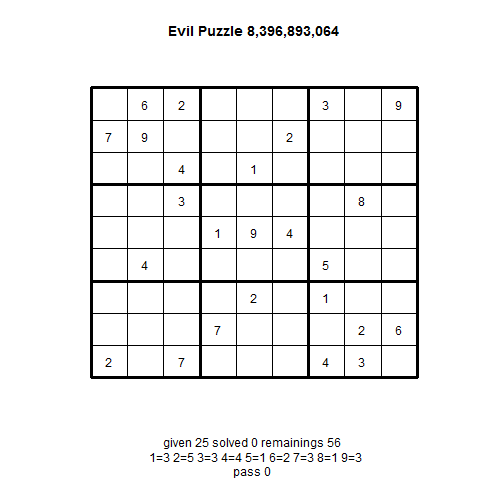 As I was not willing to spend much time on this, I used R language and RStudio to elaborate a solver that will mimic the human way of solving sudokus. I had to program three tactics. After a few erring ways, mainly due to R shallow copy behavior, I ended up with a reliable solver able to resolve any sudoku puzzle I guess, while still applying human approach. I applied it to the 2 sudokus my friend provided. Here are the results.

Solver identified 2 variants on first inference and this has led to sudoku resolution.
Variant 2 is to be rejected because on line 9 column 2 no more legal value can be elected.

Solver identified 3 variants on first inference and this has led also to sudoku resolution.
Variant 1 is to be rejected because on line 3 column 2 no more legal value can be elected. Same for variant 3 on line 6 column 1.

Running many samples through my solver, brings me opportunity to fine tune it, and to increase its robustness. It appears, that provided sudokus are not so difficult. I proceeded to many hundreds sudoku tests to validate my solver, and found none not being solved.

During the validation phase, I experimented some sudokus requiring several inferences to get solved. For example, The Weekly Extreme 'Unsolveable' Sudoku Puzzle #154 requires more than 5 level-depth inferences to be solved. see here

Is it the end of the game ?

So, we can conclude And finally, some questions remains
As question remains, I believe the sudoku game is still open.

Beware of R shallow copy, as Iyou'll probably never guess right how it works.
Indeed, very special thanks to Hadley WICKHAM for pryr package which helped a lot for resolution.